Overnight oats are porridge’s cooler, less needy cousin that don’t need all the microwave zapping, mindless stirring and tongue burning that ain’t nobody got time for in the morning. Throw them together the night before, which will take about as much effort as preparing a bowl of Nutri-Grain, and in the morning you can press the snooze button with a clear conscience knowing you don’t have to sacrifice brekkie for a little more time under the doona.

This recipe is a bit of a mishmash of concoctions I’ve seen on Instagram, Pinterest and other such things. If you search #overnightoats on Insta then you’ll be bombarded with an array of options, many of which will be presented in jars for extra indie appeal. Regretfully, I’m not that cool and had to make do with a bowl.

Once again, if you’d like to avoid my rambling commentary then head straight to the end of the post to find the recipe straight up and not so fancy free.

Grab your favourite brekkie bowl and throw in 1/2 cup oats and 1/2 tablespoon of chia seeds. 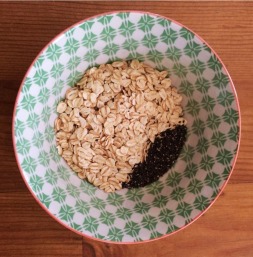 Chop up as many strawberries as you fancy, I used three big ones, and throw them into the bowl. 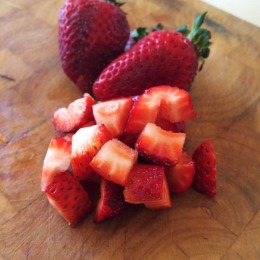 Drizzle 1 teaspoon of honey into the mix. 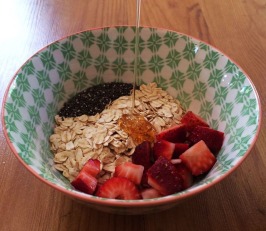 Add 3/4 cup milk. I used skim milk but you have complete freedom to use whatever kind of milk you please because they seem to make milk out of just about anything these days.

Give it a good stir, making sure the honey drizzle is nicely dispersed throughout the mixture and not just in one big gloop. At this point it will just look like a cat’s milk bowl with floaties, but chuck some trusty Glad Wrap over it and let the magic happen. 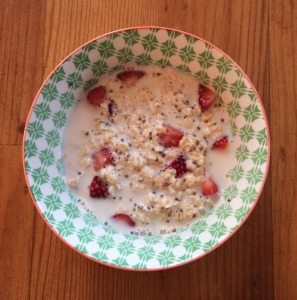 Give it a bit of a stir and eat as is or decorate with the toppings of your choice. I used banana, strawberries and granola because granola is life. Just don’t faff around for too long on the toppings like I did, because you’ll lose your head start and have to throw them into Tupperware to eat on the train. Not only will you have lost your masterpiece, you’ll have to navigate the bumps and lurches only to inevitably slop a spoonful right down your front. 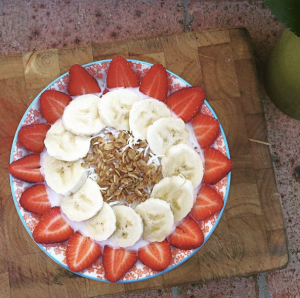 It’s much more enjoyable to eat them at your kitchen table while you fondly reminisce on the mornings you used to run around like a headless chicken.